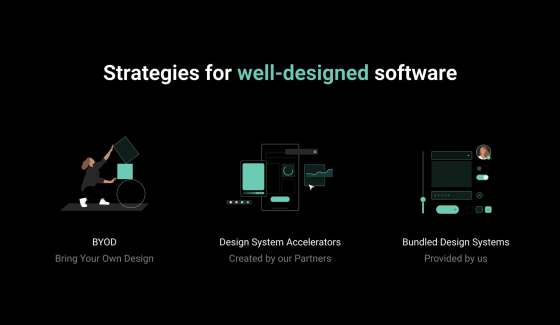 These are the new features and advances in Total Experience modeling with
GeneXus 18
, revealed in the talk
Total Experience with GeneXus 18,
given by
Mauro Canziani
, Head of Design at GeneXus, and Federico Salomón (Software Developer and GeneXus expert) as part of the
GeneXus Live: Enterprise Low-Code 2022
event:

“Among the improvements, we highlight the calculation of inheritances and the import of different classes between different Design System Objects.”

“Improvements were also made in the management of CSS files, adding the CSS Layers functionality in the Web Generator, which allows us to have a better control of the CSS files that are used in our application and their loading order.”

“In these objects, which are the ones that allow us to reuse the User Interface (UI), we added the possibility of introducing dynamic content through the use of Slots. This generates a much greater power of reuse”.

“Improvements were made to the handling of SVG image resources on all platforms.”

“New UI controls were added that are going to be distributed by default with GeneXus.”

“Enhancements were made to Modules to allow, among other things, file and image distribution per module.”

“General improvements were made to the object to be able to model User Controls for the Angular generator.”

“Bootstrap library decoupling was performed to allow all control styling to be governed by the Design System Object and not by an external library. Bootstrap will be used only for responsive size calculation and for the Action Group control.”

“The layout import tool is now more powerful and robust, so that imported layouts will be more and more accurate.”

“We now support Figma. Unlike Sketch, Figma is cross-platform, which lifts the restriction we had that to model design for GeneXus we had to use a Mac.”

These are the new features of Unanimo, the new design system that comes by default with GeneXus:

#Design System#Multi-experience
Back to top