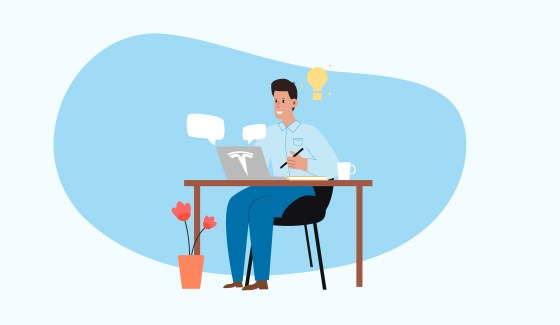 It’s
not possible to talk or think about the Tesla brand without Elon Musk coming to mind. This South African, naturalized Canadian, and American citizen was named by Forbes as “the richest person to ever walk the planet,” with a net worth of 255 billion dollars.

The also co-founder of PayPal, SpaceX, Hyperloop, SolarCity, The Boring Company, Neuralink, and OpenAI made his fortune from scratch.

How did he go about it? He learned to program at the age of 10. Two years later, in 1984, he sold his first technology idea: Blastar, a video game to kill aliens in a dark universe. The client—the South African magazine PC and Office Technology—paid him about $500 but never implemented the project. In 2015, SpaceX engineer Tomas Lloret Llinares from Spain took the code and deployed it online.
It’s
now free for anyone who wants to hunt aliens, so if you want to give it a try, you can find it at blastar-1984.

In addition to being brilliant since he was a child, Elon is also media-savvy. More than once he has set the world, his companies, or those of others spinning with one Tweet.

No doubt Elon is always in the spotlight. And Tesla too. The company is positioned as the best-selling electric car brand in the world, and in 2021 it became the sixth corporation to be valued at 1 trillion dollars in the history of the United States. It achieved this goal in just over 12 years and is second only to Facebook, as it took 3 more years than the social network.

But Tesla is not only an electric car manufacturer. It also makes everything from solar panels to model cars, mugs, thermos flasks, and umbrellas, glass bottles for serving tequila, and clothing for men, women and children. By the way, they will soon be selling electricity, starting in Texas, United States, through Tesla Energy Ventures.

The success of the Tesla world doesn’t happen by itself. In addition to its leader, there is a team supporting the quality of its products, which first emerge as ideas and then become a reality when designed.

And they really follow their instinct when it comes to design. Out of nearly 80,000 employees, only 160 are in this area.

Drawn in by Tesla’s disruptions, GeneXus CEO Nicolás Jodal spoke one-on-one with Tesla’s Director of Product Design, Javier Verdura. Javier has been part of the team since 2012 and has witnessed, first hand, the global revolution of this brand that merges design with innovation, space technology, and sustainability.

Below is part of their candid conversation during GeneXus LIVE: Enterprise Low-Code 2021.

“We (the design department) are like Navy SEALs, the elite team of the U.S. Armed Forces. They are just a few and it is very difficult to become one of them, but they are highly effective, and six of these men can do the work of a hundred soldiers combined. Elon considers us his elite war team. He keeps all of us almost as a secret, so as not to change the close-knit culture of our small team. We make sure that everyone who works there is self-effacing; that their mindset is to help others; that they have an entrepreneurial spirit; that they strive to do things as efficiently as possible… We are very proud to say that there are so few of us and we do so much,” confesses Javier, who is from Mexico and graduated as a Product Designer at the ArtCenter.

How do you manage the creative process? Do you have a specific method? How do you come up with things?

“When we have a new project—a new car model, for example—designers start working on their proposals. Elon and Franz von Holzhausen, who is head of design for all of Tesla, choose between two and five of those proposals. From there, small fourth scale models are made in clay. Then we review them and select two. We make those two to real world scale and choose one, and so on. It’s like a funnel with 100 ideas where we start to increase the level of execution and reduce the number of ideas.”

Don’t you do focus groups?

“If we’re in a meeting and we ask, ‘Why are the two headlights on the cars shaped like this?’ and someone replies, ‘Because that’s how they were designed when I was at Audi,’ that’s the worst thing you can say. This means we’re telling how things are done at other companies that have been doing it for years without innovation. For Elon, everything we do must be started from scratch, stripping everything down to the basics and starting to rebuild it with new notions, without worrying about how things are normally done.”

What would you recommend to someone starting out in design?

“Every design by a new or young designer should focus on not harming the planet. Of course it’s not easy, but it’s important.”

“No, I do many other things. All Tesla charging systems have to be designed for different countries, and there are different configurations. Everything related to rooftop solar power is a never-ending project. There are hundreds of projects that go on and on. Yes, I design all day long, but I also have many meetings with engineers. That’s a very important part, because you can design something beautiful and functional, but that can’t be produced. A designer who creates or designs things that cannot be produced at a reasonable cost is making art; he or she is an artist, not a designer.”

Design in the Tesla world

This happened 10 years ago. Elon Musk convened a meeting to ask them to design the “best car in the world.” He was talking about the Tesla Model S, launched to the market in June 2012, and named Car of the Year 2013 by prestigious industry magazines such as Automobile, Yahoo Autos, and Motor Trend (the latter voted it “Best car of the past 70 years” in 2019).

“We always set out to design the best in the world; that’s what success is all about. Design is not an expense. Design is a fundamental investment for the growth of any company. I strongly believe that, without design, a company can’t move forward nowadays. What is offered to consumers has to be well thought out and carefully designed, and must provide a pleasant experience.”

With this philosophy, they have continued to create and transform the markets.

“One time Elon and I were talking about solar panels and how we could improve the situation… And that’s how Solar Roof came about. We set out to design the best rooftop in the world, the one that would last the longest, look the best architecturally on every house, and generate free, clean electricity from the sun. It is one of the projects I am most proud of, and also one of the most difficult in my 30-year career. We’ve made countless prototypes; it was an impressive effort to get to where we are now.”

Tesla now has solar farms on islands such as Hawaii, and plans to install more in areas where access to electricity is limited or too expensive.

With energy storage in mind, they have also created systems that store the solar energy not used during the day for use at night.

“I love to say that I have a gas station in my garage at home. There I can charge my car or fill my car with energy and it doesn’t cost me anything. It is 100 percent clean energy, which came from the sun. This concept is hard to grasp and difficult to convey, but at the same time it is so obvious to be able to say that this is happening today.”

In October 2021, GeneXus launched unanimo.design, a company created to offer design services and improve the user experience of digital products and services.

“With this step we are recognizing the importance of design in the world. That’s why we’ve launched this spin-off specialized in design for all GeneXus Community members who are developing applications. After talking to Javier, I’m even more motivated and happy about making this decision. We want to help everyone in this stage,” stressed Nicolás Jodal.

37 technology and design talks
3 talks about Super Apps
16 sessions to learn about innovation and entrepreneurship
UX and design: 13 videos to be up to date and get to know trends

#Design System#DesignOps#Software
Back to top