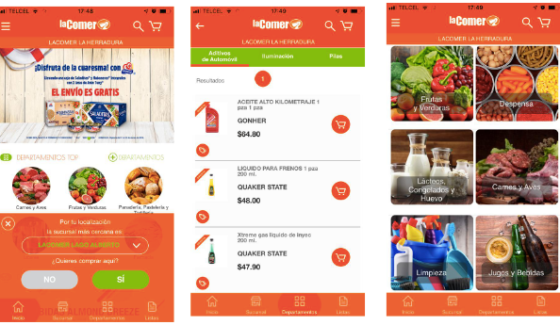 Grupo la Comer is a supermarket chain with an online store and more than 60 physical stores distributed throughout Mexico. Founded in 1930, it has presence in several states of the Mexican republic, mainly in the central region.

In 2002, Comercial Mexicana redefined its business strategy, aiming towards differentiation. This new approach resulted in the creation of its advertising mantra: ¿
Vas al Súper o a La Comer?
(Do you go to the supermarket or La Comer?), and the launch in 2006 of a revolutionary concept that has gained strong acceptance: City Market. Following the same philosophy, it introduced its supermarket concept in 2009, called Fresko.

In 2016, La Comer stores were opened based on the concept of hypermarket. These hypermarkets are focused on consumers located in cities with more than 100,000 inhabitants, and are organized into sections such as groceries, perishables, prepared foods, general merchandise, and household articles.

La Comer app was developed to open an additional sales channel providing the advantages of mobile services to millions of customers. To this end, the company’s systems area looked for a
development platform with the objective of creating a convenient and easy-to-use shopping app
that could be executed on the clients’ smartphones under iOS and Android platforms, also making available the delivery service at the store or at home.

If you want to learn how this new channel increased sales by 16 percent in a few months, read the complete success story by downloading the white paper
The new shopping UX that increased sales of La Comer supermarket chain.